Why do I set myself up for disappointment? It’s like I’m in college again and trying to date the Greek god, it’s just never going to work out, at least not in the way I think it might.

I was so excited for the damn Grammys, and now I have no idea why.

Louder, Hetfield, we can’t hear you. Via GIPHY.

I suppose I wanted to see Lady Gaga outcool Metallica, an all-time least favorite band of mine. My hatred for Metallica harks back to the year that they headlined the 1996 Lollapolooza when I was basking in my Riot Grrl phase. I traipsed through Metallica’s crowd wearing a dirty white slip and a crown of thorns while proudly displaying the word “slut” written on my arm a la Courtney Love. The Metallica crowd didn’t get my shtick and it was one of the few times I was really picked on. Then Metallica was escorted to the stage via a helicopter and I threw up my party accouterments.

But hey, Lady Gaga & Metallica is something that I can get behind. Unfortunately, the sound technicians couldn’t and James Hetfield’s microphone wasn’t on. It was embarrassing to watch him have to switch mics mid-song, but it was worth it to spy his rock star temper tantrum afterwards.

It was magnificently…dull. Via Giphy.

But who cares? Let’s get to the icky part- the Beyoncé verse Adele battle of phoniness.

First, before the Beyhive swarms into my modest home and steals all my gin, Beyoncé should have won Album of the Year, without a doubt. Lemonade is a religion, while 25 is a  Church of Scientology in Arkansas. And, Adele bores me more than Beyoncé’s performance annoyed me, so there’s that.

Part of me gets it, that I’m not really supposed to get it. First, I’m old as dirt and am clearly out of touch. But, I do possess a freakishly high bullshit/phony meter and during Beyoncé’s performance, it was higher than Mike Posner. I mean, who knew being preggers was so profound? Two married billionaires that already have one child had sex and that act resulted in two living things in Beyoncé’s belly. How… bourgeoisie. I’ve squeezed 3 brats out and I caressed my belly less throughout those 27 months than Queen B did in her way-too-long Grammy performance.

Beyoncé’s performance was certainly better than most, but for it to lauded as epic and groundbreaking just seems silly. The spoken word element, freshly torn from the sticky pages of a 14-year old’s discarded journal were funny, but I do not think that was the intention. But, I am an equal opportunity hater because my Holden Caulfield-inspired phony meter was at an all-time high (again, Posner) with Adele.

Can we start again? No, please, no. GIPHY.

Adele, you won. Take the award, thank a bunch of people we don’t know, make a thinly-veiled political statement and leave. Oh and while you’re performing, try to sing the flipping song without swearing on national television and having to start all over again. That’s what you get paid  millions of dollars to do. It was so sad to watch the crowd applaud her mediocre tribute to George Michael with tears in their eyes, not tears for George Michael’s recent passing, but because they felt badly that Adele felt badly that she messed up. Again.

What’s worse than a sore loser? A bad winner. GIPHY.

I did enjoy a lot of the Grammys. The Weeknd was excellent, Chance the Rapper was awesome, and even Katy Perry was better than usual and I absolutely loved her blonde hair. Ed Sheeran always entertains and is utterly charming.Most importantly, Bruno Mars, Morris Day & The Time did Prince right. It was a tribute worthy of pop star royalty.

And, let’s give it up to Mike Posner who appears to be 8 days away from death or rehab. Wow, didn’t this guy just look like the former Duke University frat boy that he is? It looks like he took a lot more than a pill in Ibiza, he looks like he emptied the whole  pharmacy. 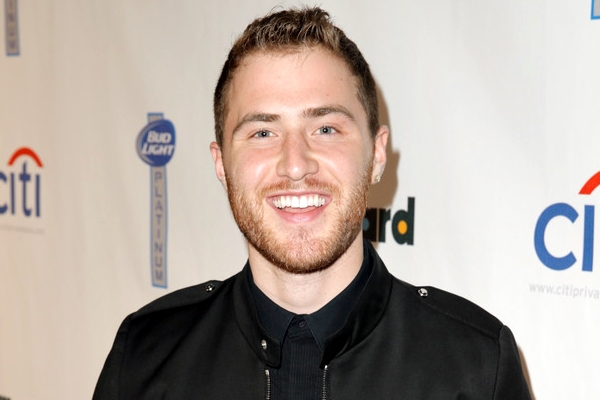 Damn, this is Mike Posner a few years ago. Wowza. Via Huffington Post.