This month of madness.

I am not surprised by much, especially not by couples splitting up. Sure as Chris Brown’s death at a young age, the Palin family making asses out of themselves and Courtney Love being the queen of cool, divorces happen.

Summertime has me all heated up, here’s what’s raising my blood pressure: 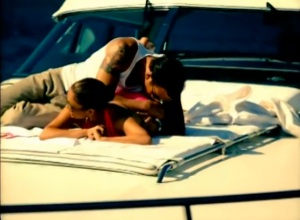 Divorce: Have we finished shedding tears over the demise of Ben & Jen, Version 2.0? To be surprised that Ben and Jen are divorcing is akin to my shock over my mom jeans being so snug. Pass me my third beer and my size 10 jeans, please.

The couple that drinks together.

countless broken engagements. Who can forget Ben planting a smooch on JLo’s derrière? Or his sweet kisses on a young, newly crowned Oscar winner, a less annoying Gwyneth Paltrow? Ben, like most of us, is looking for the next hottest thing, and unfortunately, Jen Garner’s perennially sour-faced look just wasn’t doing it for this Batman.

Now, Garner can devote more of her time to her important celebrity cause: shielding her privileged children from the intrusive paparazzi.

The president and first-lady of insipidness, Kourtney Kardashian and Scott Disick are also kaput. I still don’t know what they do, other than make my roaming eye twitch. I hope that they can keep it amicable for the sake of their three unnaturally hairy-faced children. That’s such a lie, I want to watch this become as unattractive as Kim Kardashian’s maternity wardrobe. 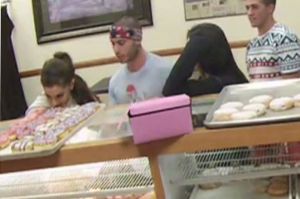 We all know where that tongue has been.

Ariana Grande’s Existence: Scott Disick, meet Ariana Grande. May you fall in love and swelter in each other’s living hell. I initially received backlash for my vitriol of Ms. Grande, but I can see that now I have America on my side! Ariana didn’t just insult us with her awful performance in “Sam & Cat” or with her child prostitute look, she licked and spat on a fresh batch of donuts after proclaiming “I hate Americans. I hate America.” I savor every moment of Ariana’s self destruction,

“I hate America. Wait? Where is America?”

she’s trashing her twelve minutes of fame like last night’s false eyelashes and hair extensions. Grande, you can mess with our ears, but do not touch our donuts. Hmm, I hear Sean Penn is single, it may be a perfect match. 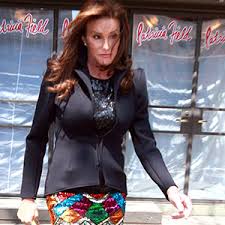 I am going into hiding after publishing the following thoughts on Caitlyn Jenner. I can’t tell you where I will be, but follow the trail of gin and mascara.

I completely accept and embrace the transgender community, however the accolades that are being bestowed upon Caitlyn Jenner are so phony. While accepting her Arthur Ashe Award for Courage at the ESPY Awards, Jenner said, “Trans people deserve something vital: They deserve your respect.” I could not agree more, but Jenner, as a human, does not deserve or receive my respect. Regardless of Caitlyn Jenner’s transformation, here are a few observations about her:

She neglected her four oldest children: The former Olympian has admitted to going years without calling or seeing her four oldest children Burt, Casey, Brandon, or Brody. She now suggests that this was during a difficult time with her identity, how cowardly to blame the abandonment of one’s children on gender issues. In Vanity Fair’s article, son Burt Jenner “remembers seeing his father no more than twice a year for a period of roughly 10 years.” How brave, how courageous.

She procreated with Kris Jenner: Kris Jenner is the matriarch of a modern-day house of horrors. She has financially masterminded an explicit sex tape starring her daughter, allowed a 17-year old girl to receive lip injections and let her young daughters be filmed on a stripper pole. Kris has the maternal instincts of an alley cat and Caitlyn was marred to this nightmare for 23 years.

Caitlyn’s transformation comes with a hefty price tag: $5 million: “E” is paying five million buckaroos to Jenner for the new docu-series chronicling her transformation. I’d like to see how much of this money goes back to the transgender community.

Jenner recently and allegedly caused an accident that resulted in a death: Accidents happen, but Jenner’s year of living well is insensitive after allegedly causing an accident in February that left one woman dead.

Jessica Steindorff, another driver in this accident states,“I find it difficult to understand how the culture we live in can honor a person who is responsible for taking a life and injuring several others with both an award and a reality show…I would hope that someone who seems to greatly value the importance of human existence would be more sensitive to the fact that she ended another person’s life. Sadly we are living in a tabloid society.”

Yes, we are, but I don’t have to drink the kool-aide, unless it’s got some good vodka in there.